It’s happening, I can hear the sound of cork opening, the Beaujolais Nouveau is arriving to you! Skeptics and party animals, meet down the street, at the bar or the wineshop – it’s waiting for you! May it rain, may it be windy, its fruit screams deep in the bottom of the glass and already calls your friends

At Vicky’s the two vintages are on the road to Brussels or Paris, meanwhile, wines have already arrived in England. Distribution will be done according to the map joined to this article : Parisians, happy ones, you’ll have more chance to find some by window shopping. In Bordeaux, London or elsewhere, you’ll have to check it out on the Internet.

Vicky’s Beaujolais on the Internet

E-shoppers, you will find my two wines on Winerepublik if you live in France- The price implies an order of 6 bottles, price included. You can always order a mixed case

In England? No problem, order on Amazon UK :).

The Vintage 2014 is giving a smile to Beaujolais, the average yields are almost reached in most of vineyards, grapes were healthy and harvest days sunny… enough to give you a perfectly fruity new wine.

You’ll find more texture, fruit and lange in my Beaujolais-Villages Nouveau by Christophe Paris, the organic Beaujolais Nouveau by Quentin Harel is lighter and spicier, some personnality. It will be to you to compare them.

Where to find people to party with Vicky’s Wines the 20th of November?

- At Les Gouttes de Dieu (rue Rossini, 9th district) in Paris where I will also be (Facebook event)

- At the Canailles du Chatelain in Bruxelles (rue du Bailli), the same day as the restaurant anniversary (Facebook event).

A Label to draw on

I am expecting your drawings of dresses on the label that you have helped me pick last month - I already have 2 cools ones for you – To be followed on Instagram, Twitter or Facebook with the hashtag #VinsdeVicky. 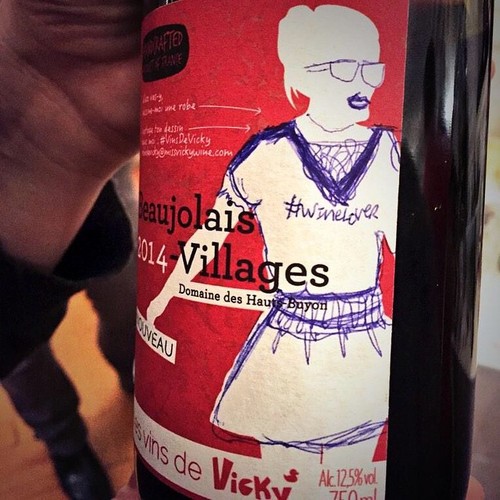 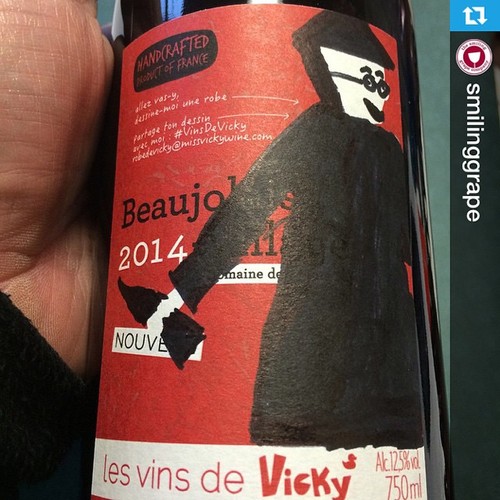